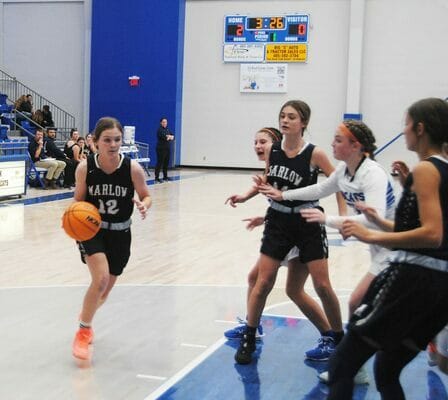 Cutline: Marlow #12, Lakyn Foss, doesn’t let distractions get in her way as she goes for a score during the game against Bridge Creek Monday, Nov. 28, 2022. Marlow’s Carson Lovett is also doing her part in keeping Bearcats players away from Foss. Photo by Miranda Hance/The Marlow Review

Tonight, the JV girl’s game has been pushed back to start at 5 p.m. because Lexington doesn’t have enough boys to play a high school JV game. Doors open at 4:30 p.m. at the new gym.

Homecoming also happens tonight for the Outlaws high school basketball teams. Varsity girls game tips off at 6:30 p.m. Boys varsity is scheduled to start at 8 p.m. and the basketball homecoming is at halftime.