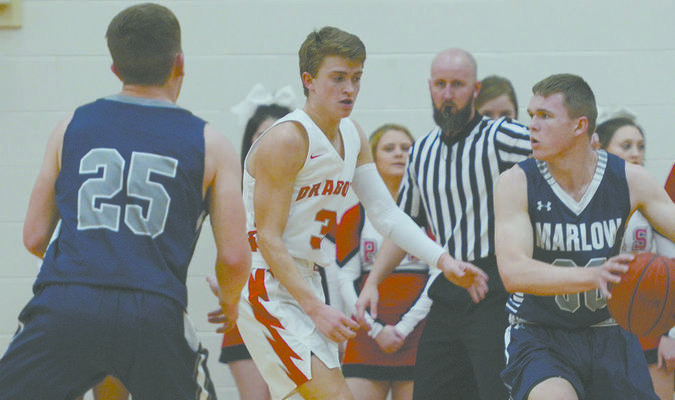 LOOKING TO PASS: Marlow Jace Gilbert looks for an open teammate at the district tournament in Purcell last week.

The Marlow Lady Outlaws won the district title and the Outlaws finished as runner-up at Purcell last Friday.

The games were originally scheduled to be played in Marlow, but because of Marlow hosting a wrestling regional, it was moved to Purcell.

After a sluggish first half against Purcell, which came into the game having only won three games all season, the Lady Outlaws got their game in gear in the second half to pull away for the win.

Marlow trailed in the early going before closing out the first quarter on an 8-0 run to take an 11-7 lead into the second quarter.

The Lady Outlaws (17-6) led throughout the second quarter, but Purcell (3-19) kept it close with Marlow holding a 21-18 halftime lead.

Meshell would go on to finish with a career-high 19 points to lead Marlow.

Marlow kept up the pressure in the fourth quarter, outscoring the home team, 20-8 to pull away for the win.

The Dragons (16-8) led from start to finish, but it was the second quarter that proved to be the most crucial. After trailing 18-10 at the end of the first quarter, Marlow could muster just two points in the second quarter and found themselves down 29-12 at the half.

Marlow (7-16) played better offensively in the second half but was never able to get the lead back under double digits.