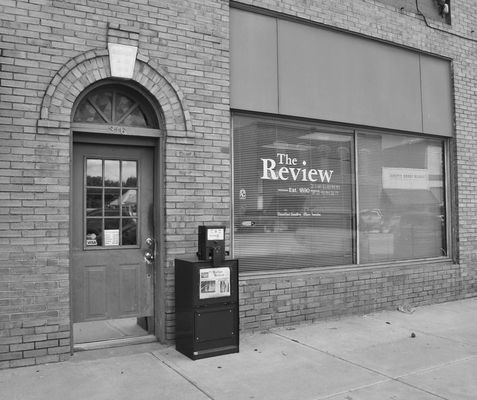 Our community has the privilege to celebrate the anniversary of a business which has served Marlow for 127 years -- The Marlow Review. This business which has been the scribe of our heritage merits recognition and congratulations each October. This portion of an October 3, 1929 Marlow Review article, written by Dr. R.L. Montgomery, Marlow pioneer and Mayor of Marlow at the time, helps tell the story. While the entire article is too lengthy to include here, the rest will be shared later.

“This edition of The Marlow Review (October 3, 1929) will commemorate its 37th year of service to the people of Marlow and the surrounding communities. They have been years of growth and development of this country and The Review has kept step to the march of progress.”

“In 1892, a little white-headed, sandy-mustached man by the name of Jones blew in upon Marlow in a covered wagon with a little hand press and a small bunch of type, containing the most of the alphabet, and settled down in a little office on Main street and began the publication of a periodical known as the Marlow Magnet. There were not more than thirty or forty people here, who laughed at Jones’ nerve and optimism and made jokes of his reckless audacity in thinking that he could establish a paper in Marlow.”

“That was in the long ago, before civilization or the law had come this far west; when the six shooter arbitrated the differences between gentlemen and was the court of last resort. It was when the cowboy rode into the pool hall, ordered drinks on horseback and indulged in all such innocent amusements such as shooting out the lights.”

“The railroad had not been built and it was sixty miles to the nearest market. There was not a church in what is now the city limits, nor a school house. We went to church in the country. Our roads ran on divides so that we traveled a long ways to get a short distance. Our broad prairies were covered with a native verdure and in the spring time portrayed a picture once seen, never to be forgotten. Cattle were grazing upon a thousand hills. The air was perfumed with the aroma of the wild flowers which were scattered in great profusion.”

“There was a little farming on the creeks and the virgin soil responded generously to the toil of the husbandman.”

“Our streets, now looking so beautiful with their pavement like a white ribbon, with pretty trees on each side, with our elegant homes, attractive parks, and yards so artistically adorned with vines and flowers, but at that time our streets were only sandy trails meandering in a zig-zag fashion around the jack oaks. This town was just a thicket. The shin oaks were so thick and dense that it was with difficulty that they could be penetrated. To hunt quail it was not necessary to go further than what is now the incorporation of the city. The people lived in little dug outs and in cracker-box houses. The houses were so open that during a ‘big norther’ with a good jack oak fire burning on the hearth a fellow’s stomach would almost fry while his back would nearly freeze.”

Dr. Montgomery -- who was much loved by the community, and known as “Dr. Dolph” – was one of a handful of adventurous, and progressive pioneers who left their lives behind, traveled to the untamed land, and laid the foundation of the community we enjoy living in today.
As Marlow’s 2019 volunteer community strives to live up to Dr. Dolph’s legacy, a Chamber get-together is on the October calendar. Delta Sigma will be preparing their famous lasagna and all the fixings for the October 15 Chamber Luncheon in the Lions’ Den. Tickets are again $6 each and may be purchased from members of Delta Sigma, members of the Chamber Board of Directors and at the Chamber office. Proceeds will be used, as always, for the betterment of our community. You are invited!