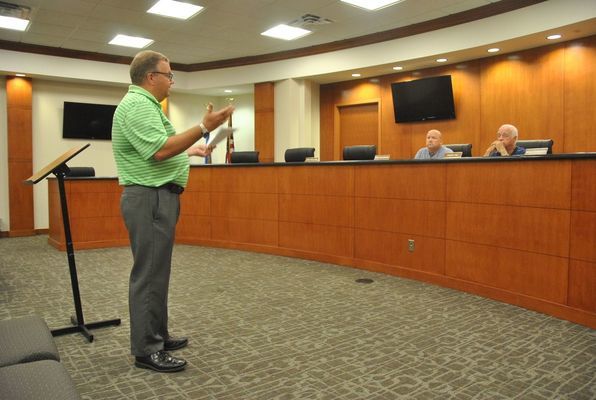 The Marlow Planning and Zoning Commissioners met on Tuesday with a limited agenda that included information regarding subdivision regulations presented by City Administrator Jason McPherson.

McPherson explained that Title XI of the City Code does not include subdivision regulations, which had created issues for the City in the past that are ongoing. “There have been others put forth but nobody really liked what we had so they weren’t put in,” he said.

“We looked at two other ‘public power’ cities and one where the City Manager was a planner for the City of Dallas. So we’ve taken those and kind of molded those in there,” McPherson said.

McPherson pointed out that the information packet also included an overview of how the Commission, City Council, and City staff would be involved in the process.

“I also want to point out that we tried to keep this as simple as possible so that…there’s got to be staff to enforce [the regulations]. And if we make it completely difficult and overbearing, it’s hard to enforce.”

McPherson explained that the goal was to make compliance with the regulations as simple as possible while still enabling development in the city.

One priority in the regulations would be alleys. “We were shocked that other cities don’t require alleys,” McPherson said. “Especially the two public power cities that we looked at. We want to require alleys because we must have access so we can fix electrical problems and water problems. We can’t be left not having access.”

Another priority for subdivision regulations is drainage. “We want to make sure that drainage is properly covered,” McPherson said.

He asked that the Commissioners review the materials and meet to discuss them at the next meeting of the Planning and Zoning Commission. No immediate action was taken.

The matter will go before the City Council at the regular meeting on Tuesday, October 22 at 5:30 in the Council chambers.