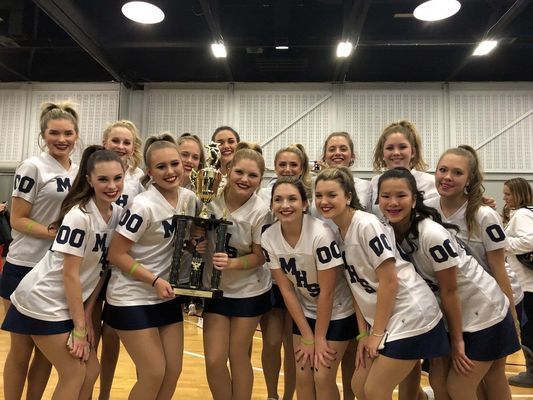 The Marlow Bootleggers dance team took their show all the way to the top on Saturday, winning a State Championship in the kick category against 2A, 3A, and 4A teams. This is the third time the Marlow team has brought home a first-place trophy in kick.

“This team has been a joy to coach and mentor,” said Bootlegger coach Leesha Crowson. “Our mottos this year were “Make Memories” and “Mental Toughness.”

Crowson said the team has worked for 11 months to put this high-level group together. The work began in February with a dance bootcamp for prospective team members, followed by tryouts in March. Team meetings began in April, fundraising in May, and camp in June. The Bootleggers ramped up for the fall season with two-a-day practice during the month of August. After the busy football season, the team immediately began practice for the state competition.

“They also started a new community service project for each month of the season,” Crowson said. “In August, they had penny wars and raised $300 for clean water wells in Africa. In September, they performed at all 3 assisted living centers in Marlow. In October, they raised $750 from selling pink out shirts for the southwest cancer center in Duncan. In November, they gathered toys and hygiene items for 8 Samaritan Christmas shoeboxes to be delivered around the world.”

The Bootleggers have weekly team dinners and joint Fellowship of Christian Athletes meetings with the Cheer team. “They also meet weekly to make game day posters for the high school hallways.”