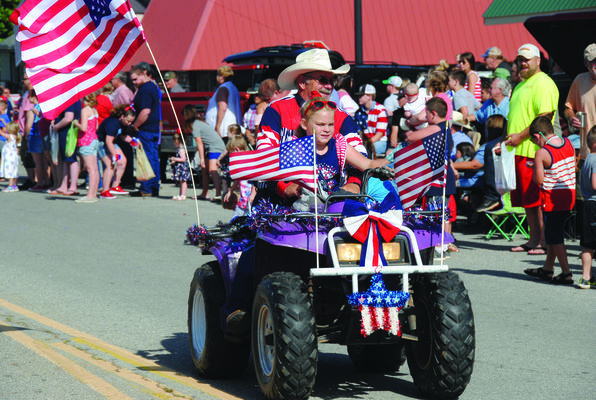 All over the county, classic cars are being polished, four wheelers are being decorated, and dance routines are being perfected in anticipation of the biggest party around: Marlow’s annual Independence Day celebration.

The festivities begin at 8am Thursday, when organizations and individuals start lining up near the intersection of Seminole and Sixth Street. Anyone who’d like to participate in the parade is welcome to do so, including civic groups, clubs, and individuals. The Marlow Chamber of Commerce, hosts of the event, will register each participant before the parade begins.

Horses and horse-drawn conveyances are asked to line up behind City Hall at 119 S. 2nd. Motorcycles should line up with the cars on Seminole.

Prizes will be awarded to antique vehicles, including Best Modified, Best Original, and Best Decorated. Similar awards will be given to tractors and decorated ATVs as well as horses and horse-drawn entries.

The parade begins at 9:15 on Sixth Street and continues down Main Street to First, near the icehouse. It typically lasts around an hour, and then the festivities are kicked off at Red Bud park immediately after.

The National Anthem is scheduled for approximately 10am, followed by entertainment all afternoon. Vendors will offer food, drinks, and merchandise, and there are several groups organizing games as fundraisers.

Entertainment begins on the main stage at 6pm, when Richard Clift Jr kicks off the evening with some acoustic music, followed by Jack Tidwell. Hometown favorite Chance Anderson will take the stage after that, and will continue until the fireworks begin at 10pm.