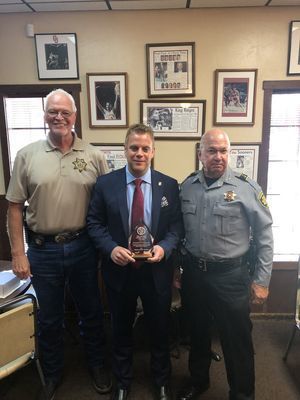 State Rep. Brad Boles (R-Marlow) recently was honored by the Oklahoma Sheriff’s Association with a 2019 Legislative Award. The award was bestowed during the Sheriff’s regional meeting on Sept. 19 in Chickasha.
“It was a great honor to be recognized by the Oklahoma Sheriff’s Association for the legislation I carried and successfully passed supporting law enforcement during this year’s legislative session,” Boles said. “I am very appreciative of all those who serve our state in law enforcement, as well as our first responders, who daily risk their lives for the safety of all Oklahomans.
“When I think about these men and women, I’m reminded of John 15:13, which states, ‘Greater love has no one than this: that he lay down his life for his friends.’ I am proud to support these men and women and appreciate their commitment and dedication to protecting us all.
“I personally want to thank Stephens County Sheriff Wayne McKinney and Grady County Sheriff Jim Weir for their leadership. House District 51 is blessed to have them both as sheriffs in our district.”
In presenting the award, Ray McNair, executive director of the Sheriff’s Association, said Boles took on a difficult task this last legislative session by setting a basic salary range for elected county officials.
“I feel that, as Chairman of County & Municipal Government, he will have an open-door policy and be willing to listen to several issues that seem to plague county government,” McNair said. “After meeting Rep. Boles, I know we have a supporter of not only the sheriffs in Oklahoma, but all county officials. The Legislative Award is meant to honor those who keep their commitment to support sheriffs when difficult choices must be made, and Rep. Boles is a shining example of that.
Boles serves as the Chairman of the County & Municipal Government Committee for the Oklahoma House of Representatives.