Marine Ready to Ride Again with Help of Prosthetics 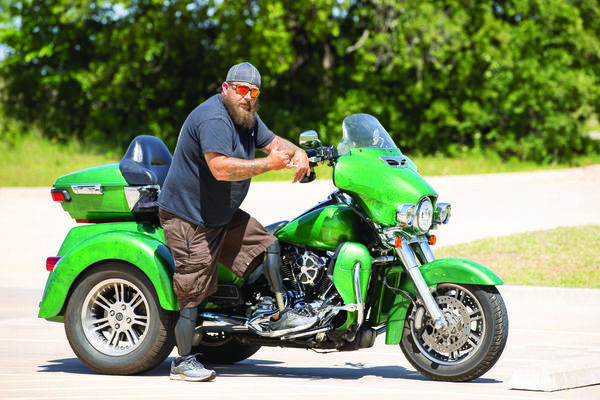 Sergeant Greg Edwards from the United States Marine Corps was injured in an IED blast in October 2006 while he was on his third tour in Iraq, resulting in the loss of both legs. Edwards traveled from his home in Mobile, Alabama to Dream Team Prosthetics in Duncan, Oklahoma to meet with the Clinical Director Chad Simpson and his team and to be fitted with custom, computerized prosthetics to help him gain back his ability to do one thing he is most passionate about: riding motorcycles.

“I’m always on my bike and if I’m not riding my bike, I’m working on a bike,” Edwards stated.

Before coming to Dream Team in Duncan, Edwards had several issues with the fit of his previous prosthetics and was not able to do a lot of what he would normally do before sustaining the injuries.

“The fit is much better than it was before, when I first came to the lab. Yesterday was the first time in four or five years that I was able to walk around a store because the fit used to be so bad,” Edwards said.

Edwards’s custom prosthesis have been molded to fit him comfortably and have been custom designed around the scar tissue he developed from the injuries. Each prosthesis uses soft, pliable, bio-elastic material that is thermoformed to match the shape of the residual limbs, allowing him the ability to comfortably use the prosthesis daily for extended periods of time.

“Our expertise is designing a custom socket interface for individuals with significant limb trauma,” Simpson said. “Greg obviously has a traumatic amputation from a blast injury from an IED and with that comes a lot of complications. Part of what we do is mapping around that unique scar tissue and bony prominences to hopefully give him something that he can wear for long periods of time without any kind of issues.”

The entire process of designing, making, and fitting the prosthetics took place at the Dream Team lab in Duncan, making it possible to make any adjustments and to provide Edwards with comfortable prosthesis that allows him to continue his normal activities. Edwards is passionate about motorcycles and with his new custom prosthetics he is able to ride his bike like normal again without any modifications to his bike.

Simpson explained further how they fit a prosthetic limb to someone who would be using a vehicle.

“When creating a prosthetic for someone who is using a car, or in Greg’s case a motorcycle, we want to make sure it fits well to their body, so they can change from gas to break, or for Greg so he can shift gears,” Simpson stated.

Edwards traveled about 800 miles to meet with Simpson and the team at Dream Team Prosthetics and says that every mile was worth it.

“Dream Team, they’re the guys that actually know what they’re doing and that can set me and the prosthetics up so I’m not having to use a wheelchair or be in pain while I’m using the prosthetics,” Edwards stated.

At Dream Team, Simpson has treated several service members from the United States and allied countries who have traveled to Duncan for their prosthetics and the entire team works hard to give those individuals back their ability to live a mostly normal life once again.

“I think all of us here at Dream Team, our goal is to give back all functionality in their life that we can and in Greg’s case we wanted to make sure that he was able to do everything he had done normally before his injuries. We want to make sure every patient that we teat can get back to as normal of a life as possible,” Simpson said.

Edwards is able to return to not only riding his motorcycle but also the other normal activities he did prior to sustaining his injuries and is grateful for what Simpson and the team at Dream Team has been able to give back to him.

“My only limit is my imagination of what I can’t do and overall it’s very gratifying to be vertical and be able to walk around and do things on your own. There are a lot of people out there who aren’t as fortunate and able to do that, so I am very grateful for that,” Edwards stated.

Edwards has been through a tremendous amount of trauma but says he would not change a thing.

Edwards is returning back to normal life and continuing his passion of riding his motorcycle with the help of his new prosthetic legs created by Simpson and the team at Dream Team.

“I lost my legs, not for this country, but for the country of Iraq, so their children will be able to run around just like mine. If time was turned back, I’d do it all over again,” Edwards said.