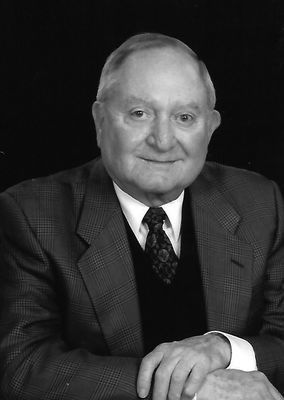 Jerald Ketchum died on Tuesday, September 1, 2020. Memorial services will be held on Friday, September 4, at 10:00 A.M. at All Saints' Episcopal Church officiated by Father David Galletly, assisted by Reverend Susie Lindley. Inurnment will be in the Columbarium of the church under the direction of Whitt Funeral Home.

Jerry was born in Duncan at the Patterson Hospital, April 15, 1930, the only child of Fern (Coffelt) and Charles W. Ketchum. He attended Duncan schools until graduation in 1948. He attended Colorado College and graduated in 1952 with a degree in English. He taught English Rhetoric at the University of Illinois and did graduate work completing work for a Master of Arts in Theater. After that he served as Head of the English Department at the Garland School in Chester, New Jersey for ten years.

In 1970 Jerry returned to his roots in Duncan where he worked in the business offices of the Lindley Hospital and Clinic for twenty-four years before retiring in 1994. He lived in the family home on Hackberry that his parents built in 1927 before moving to assisted living and later Elk Crossing.

Jerry was baptized at the First Christian Church in 1938 and remained an active member until he moved to college. Jerry was confirmed in 1954 at the Episcopal Chapel of St. John the Divine in Champaign, Illinois. When he returned to Duncan, he became an active member of All Saints' Episcopal Church, serving as choir member, Vestryman, Sr. Warden, lay reader, chalice bearer, member of two search committees, Delegate to Diocesan Convention, and served as interim treasurer for several years. His church has always been an important part of his life. After he was unable to attend church, his dear friend, Ellen Templeton, visited him often where his first question was, "What's going on at church?"

Other interests include playing bridge, gin rummy, and international travel. He met and maintained friendships with people all over the world from his travels.

Jerry often said that he thought to return "right back where I started from" was the worst thing that could happen to anyone, but he soon learned that it was the best thing that could have happened to him. In church he often gave thanks "for health and for friends". He claimed the following lines as appropriate: "Think where man's glory begins and ends, and say my glory was I had such friends."

Jerry is survived by his cousins, Lisa Lawrence of Duncan and Rhonda Green of Germantown, Tennessee.

Visitation will be held after the memorial services at All Saints’ Episcopal Church. In lieu of flowers, contributions may be sent to All Saints' Episcopal Church, Duncan Little Theater, or Friends of the (Duncan Public) Library.