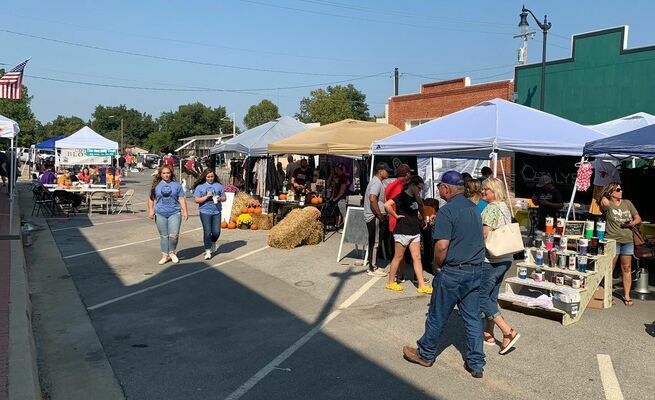 Second on Second has expanded in its second year and will take place on Saturday, October 9 from 2pm – 8pm on Second street north and south of Main. The event, a block-party style festival, features live music, games, vendors, and food trucks.

Event organizers said that the festival is a celebration of what Marlow has to offer.

“Years ago, Marlow had a little festival that celebrated the harvest of peanuts from area fields. It was a block party on Main Street and we grew up with great memories,” said Tandy Banks, co-producer of Second on Second and owner of Giuseppe’s. “We’re trying to recreate a little of that fun in a time when some many things have been stressful. We have great businesses and groups here in Marlow and we want to have some fun, celebrate, and appreciate what a great thing we have here.”

Games offered include a soft-dart shooting gallery and yard-sized Jenga, as well as a combination soccer/billiards game where marked soccer balls are used to play eight-ball or other pool games. The playing surface is felt with pockets and side rails like a regular pool table, and players use their feet to kick a cue ball.

A cornhole tournament will begin at 3pm and teams can compete for cash prizes. Teams may register on-site beginning at 2pm or pre-register by contacting Lynne Ramsey at 580-641-2256. The drop-down tournament guarantees teams at least 3 games. The cost is $40 per team.

Live music will start at 2pm and last until the event closes at 8pm. Featured artists are Cade Roth, Kaleb Glover, and Jaci Jessen. The headliner band, Von Hawks Rising, will take the stage at 6pm.

Vendors include boutiques, fitness providers, and gift booths as well as bingo, a photo booth, and face paint. Multiple food trucks will be on-site and Cotton Blossom Winery will offer beer and wine to adults.

"We are beyond excited to host this event for our community,” said Ryan Bell, co-producer of Second on Second and owner of Cotton Blossom Winery. “We hope it brings families and the community together for fun and fellowship. We want this event to draw in folks from not only Marlow, but the surrounding communities as well."

CUTLINE: Vendors are preparing for the Second Annual “Second on Second” event slated for Saturday, October 9 on Second Street in Marlow. A map of the festival, as well as vendors and sponsors, is on page PAGE of this edition.

Burn Ban in Effect for County