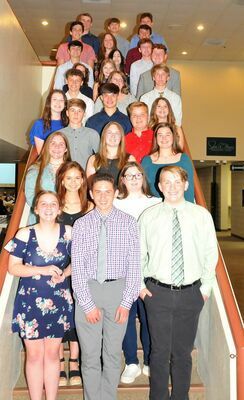 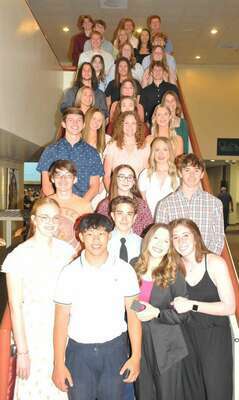 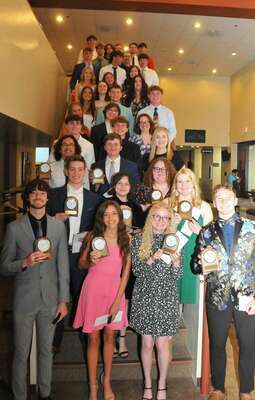 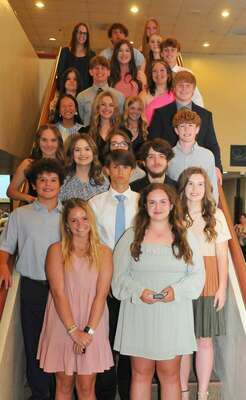 Marlow High School held its annual Academic Banquet on Tuesday, honoring approximately one-third of the student body for academic achievements. The banquet, now in its 26th year, celebrates students in each class who reach benchmarks for grade point average (GPA) and awards qualifying students with pins, charms, and scholarships.

The banquet is funded by over $20,000 in donations from the community, representing businesses and individuals who support the program.

Tuesday’s event featured local dentist Ryan Scott, who had some words of wisdom for the students, including anecdotes from his experience in college after graduating from Marlow High School.

Scott spoke about making decisions after graduation, including deciding to change his major at East Central University, which eventually led him to dental school. He also told a story about a fellow student who decided college wasn’t the right choice.

“He found out that wasn’t his path,” Scott said of his friend. “There are lots of different paths for people. Just know that if you make a decision and start down a path, you might be able to change it.”

Scott illustrated the point using the poem, “The Road Less Traveled” by Robert Frost. He said that the poem – and his advice to students – was to Stop, Challenge, and Choose.

“Think about both sides, see how far down each road you can see, and then choose which way you’re going to go,” Scott explained.

He said that just like in the poem, people are faced with the choice of which path to take on a regular basis, and that looking back with regret is not productive.

“You never get to go back; you made a decision and continue on. ‘Shoulda, woulda, coulda’…you don’t get to keep thinking about that. A decision is made, you chose it, that’s your decision and you have to own it and move on to the next one….you don’t get to do it over again; that one has passed. Make the best of the road you’re going down.

“When you second guess yourself, all you’re doing is adding stress to your life,” Scott added.

“Every adult in this room can look back at every decision they made that got them here, and they can think of that same decision and how if they would have gone down the other road they wouldn’t be here, they would be somewhere else.

“Everything kind of weaves together to where we have four hundred people in this room, celebrating the accomplishments of 120 students,” Scott said.

Students who qualify for the first time receive a pin, and in subsequent years they are awarded a charm to add to it. Those seniors who qualify to attend the banquet all four years of high school and have an unweighted 4.0 GPA also receive a commemorative clock. Every qualifying senior receives a scholarship.

The event, held at the Simmons Center for the first time in three years, is typically seen as the first of many end-of-year events for seniors at MHS.